The fact that Kamphuis got off the train at Fauske for a paddle trip also seems unlikely. It rained and blew hard that day.

‘Everything about the disappearance of Kamphuis is getting weird’

The disappearance of cyber activist Arjen Kamphuis is starting to look more and more like an episode from a Scandinavian detective series. The port city where he stayed is the Norwegian capital for cyber defense. Did he maybe work on a secret operation? And is he hiding on a cargo ship? This website went on research.

The last tangible trace of Arjen Kamphuis lies almost carelessly in the garage behind Fauske’s police station. His folding kayak, found on a beach of the fjord on Tuesday night, fits just between the police car and the wall. The kayak looks like corrugated cardboard. The white material is almost transparent, so thin. There is a wide gap between the black straps, which
clearly does not belong there.

The mysterious disappearance of the Dutch cybersecurity specialist is not an everyday affair in the remote town above the Arctic Circle. The last big news before Kamphuis disappeared from the radar? “That must have been the reindeer bloodbath last winter”, says photographer Tom Melby of the regional newspaper Avisa Nordland. “Hundreds of animals crashed into the train. The flesh hung in the trees.”

Kamphuis took a similar train on Monday afternoon, August 20 at 16.05 after he checked out with his kayak at his hotel in Bodø. The single track between Bodø and Rognan runs right next to the Skjerstadfjord. On the left a steep mountainside, on the right the sea arm. More than eighty kilometers long, four kilometers wide and up to four hundred meters deep. A person can easily disappear here.

Has Kamphuis turned around with his Kayak and drowned? This is what the reporter Fredrik Stenbro suspects from the local newspaper. He is not of the conspiracy theories. “Here you have the Saltstraumen, a super strong maelstrom where the sea water pushes through the narrow entrance of the fjord. Maybe he did not catch the train but he was stupid to go kayaking there, he turned around and the kayak has floated here.”

The Saltstraumen is no place for kayakers, agrees skipper Geir Sundt, who organizes raft excursions. “Certainly not for an inexperienced kayaker. And certainly not in a folding kayak. I never see them here.” But that the vessel would have floated all the way to Fauske, fifty kilometers into the fjord? That seems unimaginable to him.

The fact that Kamphuis got off the train at Fauske for a paddle trip also seems unlikely. It rained and there were hard winds that day. Two days later he would fly back to Schiphol from Trondheim. The weeks before it had been beautiful weather. He had had enough opportunity for sailing trips in the area.

His friends find it strange that he had just bought such an expensive kayak (about 2,000 euros) just before leaving in the Netherlands. “He likes adventurous mountain hikes, but kayaking? We had never heard about that before” says friend Ancilla van de Leest.

Every snippet of information raises many new questions. How is it possible that his one telephone at Fauske last contacted on August 20, but another device of his ten days later is turned on at Vikeså, 1600 kilometers south? Did someone find that phone and put in a German SIM card?

Moreover, witnesses claim that they saw Kamphuis around Stavanger around that time. He would then also have been spotted in Denmark.

Did Kamphuis leave his stuff here deliberately to create a wrong track? But why did he use his second telephone for a while? He knows very well that a phone can be traced.

Was Kamphuis really on vacation, as he claimed? Or is the cyber specialist, who advises governments and whistleblowers at the highest level on how to safely send information without being intercepted by enemies, involved in a sensitive case? Does it have to do with the hiding WikiLeaks founder Julian Assange, whom he helped before?

The quote above and below is from:
Algemeen Dagblad, Holland, September 17, 2018 [Google translate from Dutch]

Kamphuis said to friends that he was going on vacation to Spitsbergen. He had initially booked a hotel there, but canceled it before he left. They never heard him speak about Bodø, the town where he spent the last ten days before his disappearance. “Strange”, according to Van de Leest. “Normally he tells where he is going. It is also not normal for him to stay in one place for ten days. ”

Four days after his plane landed in Trondheim, Kamphuis checked into the harbor town at the luxurious Radisson Blu hotel. When there was no room available after seven nights, he moved to another four-star hotel: the Scandic Bodø.

With 50,000 inhabitants, Bodø may be the capital of the 450 kilometer long Nordland province, it is not a place where tourists stay. Bodø is primarily a logistics hub. Here lies the most northern railway station in Norway and from here, small planes leave even further north and ferries travel to the Lofoten.
“There are few tourists who sleep here for more than two nights,” says the receptionist at Scandic.

The center is utterly ugly. The historic city center with wooden houses was completely destroyed during the Second World War. Instead, large hotels and an insipid indoor shopping center have been added. Now that the summer is over, the evening falls early and the rain steadily drops from the thick cloud cover, many travelers stay in their hotel room in the evening. Not surprising when you see what a beer costs in the few local pubs.

What did Kamphuis do here for ten days? The police conclude from telephone records that Kamphuis in any case did not go to the Lofoten archipelago. He stayed within a radius of seventy to eighty kilometers from Bodø.

Apart from the hotel receptionists, who checked him in and out, nobody saw him. Where did he eat all those days? Not in the Radisson’s restaurant, the manager says. “I never saw him. I know that for sure.” Kamphuis, who is known as a lover of fish and good restaurants, has also never eaten at the excellent fish restaurant opposite the harbor. “We talked about it, a friend of his has also searched here”, says a waitress from Bryggeri Kaia. “He has not been here.”

At other eateries, at cafe Kaptein Larsen next to the hotel, the newspaper shop in the lobby, two mini-supermarkets in the neighborhood, the handful of sports and outdoor shops in the city: the same story: no, no, no. The police also have no indication that Kamphuis spoke to people during their stay.

Apart from being a hub for tourists, Bodø also turns out to be a hub for precisely that mysterious field in which Kamphuis specializes. In a former Nazi bunker in a mountain – hiding from Russian atomic bombs – the Joint Headquarters of the Norwegian army is housed. Part of this is a cyber defense unit.

In Bodø there is also an air base that also serves as a base for NATO. As soon
as a Russian fighting apparatus flies into the northern boundaries of the alliance, F-16s rise up here to take it down.

And perhaps most strikingly: in Fauske, a few kilometers from where Kamphuis’s belongings are found, the Norwegian intelligence service has a basis where data is collected and analyzed that come in from satellites.

The police say they have no clues that Kamphuis visited the bases or spoke to people. The army does not want to say anything about it, says a spokeswoman for the headquarters. Van de Leest, former party leader of the Pirate Party, is certain. “This can not be a coincidence. This is exactly his thing.”

Suppose Kamphuis is indeed engaged in a secret mission. Could he have come from Fauske in Vikeså without being seen? The cyberspecialist could erase digital traces like no other. He also regularly crossed national borders by foot, to stay out of sight of cameras. It is unlikely that he went to Stavanger by train, a journey of 26 hours.

In Rognan, a sleepy harbor town with colored wooden houses at the end of the fjord, another story goes. Around the time Kamphuis disappeared, a cargo ship with cargo from the local cable factory Nexans left for Stavanger. “That was here in the harbor for weeks”, says waitress Kristine in the only hotel that looks out on the quay. “It was a big ship that also sailed to Canada. He may have hidden himself there. ”

Van de Leest would not mind seeing if the theory is right. “It sounds unlikely, but everything about this story is strange now. In addition, Arjen had spoken about it a few times, half jokingly with his black humor. If the Apocalypse were to come, he could always still flee by cargoship.”

The fisherman that found the passport and belt bag was extensively presented in the media with name and interview. (Even so much that he protested against it.) But the “person that found the canoe and pulled it ashore”, was not. Neither did “that person” report the finding to the police even though Arjen’s disappearance was the biggest news in the area for a very long time.

This blog concludes that that person may not exist and the canoe was never in the water. The “perpetrator” never pushed the canoe into the water where it would have been discovered quickly.

1. journalists not trained in witness interrogation and will ask leading questions

media & witness both wish to comply with the general opinion

3. there is no way to verify that media’s “anonymous sources” exist at all

The Local
However police said they were examining three theories: a voluntary disappearance including a possible suicide, an accident or a crime.

The extremely strange actions of the police are a clear sign they are covering up and are not trying to solve the case. The only reason for this, this blog can think of is that the police is covering up involvement of the NSA/CIA or similar. 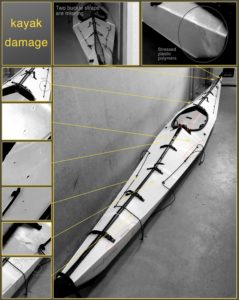 Note:
Both Raymond and Leest (twitter) connected to Pirate Party