US 2020 elections are rigged

The US 2020 elections are rigged. The Democrats are not trying to win the presidency.

How are the Democrats not trying to win the presidency?

The candidates are not picked to win the election. Biden, Sanders and Bloomberg are all between 78 and 79 years old, which would make them 86-87 at the end of an 8 year tenure which is too old for a US president. Buttigieg was another major candidate, but he stepped down. He is a homosexual which at present is too radical to attract voters to be a president.

The Democrat candidates are intentionally making fools of themselves. They wish Trump to win the elections:

Biden says that another supporter is “full of sh-t” when the supporter criticizes Biden in a rational way.

Biden pretends to forget the name of president Obama, under whom Biden served as vice president for 8 years, up to as late as 2017.

Sanders invites an imam to praise Sanders in Arabic during a rally. Thw imam also says in English that Sanders should clear out the White House from the Corona-virus called Trump. The imam has previously said that Sanders is an honorable man, “even though he is a Jew” (@2:50). The imam is not serious. 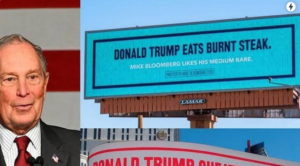 Why are the Democrats not trying to win the presidency?

The reason the Democrats want Trump to win is that they agree that his policies are better for the country. He puts America first. He tries to reduce immigration. He does not waste money on climate action which so far has no solid scientific foundation. Republican agenda runs the country but media cover Democratic ideas. California and Hollywood is what the Americans want the rest of the world to emulate, not how the US is actually run.

The Democrats collaborate with CNN and other Main Stream Media to propagate liberal ideas over the world. Liberal ideas that are not implemented in the US, but only a showcase for the rest of the world. Sanders promote big spending on a Green Deal, but he is extremely unlikely to become president to implement it.

These liberal/Democrat progressive ideas are not implemented in the US but spread to Europe. By spreading liberal ideas to Europe and other parts of the world, the US contributes in destabilizing them.

What methods are used to destabilize Europe?

Feminism and climate action are part of a US attack to destabilize Europe.

US wars have also produced enormous masses of refugees into Europe. The refugees destabilize societies and ethnic conflicts make it impossible for European people to unite to raise demands on their governments.

Many European governments are controlled by the US. One mechanism of control is the Main Stream Media, always giving the same interpretation to news. The news is synchronized from the US east coast, The New York Times being the most influential newspaper. The EU is another mechanism to strengthen foreign influence by f.ex moving control away from the people affected.

Climate action is another of the ideas supported by the Democrats, not being implemented in the US by the Trump regime. EU weakens its member countries by f.ex high climate spending and detailed regulations.

Internet has strengthened the US dissemination of propaganda. Google only shows information slanted in pro US angle. US supportive trolls dominate most forums. It is now possible for US/Trump to pull back overseas commitments. The Internet will now suffice to influence foreign countries.

US Democrats are only faking a liberal agenda in order to spread it to Europe and other parts of the world to destabilize them. In fact, US Democrats are behind Trump to protect the US.

NEW YORK (Reuters) – Democratic presidential front-runner Joe Biden has quietly expanded his lead over President Donald Trump among registered voters, even as the rapidly spreading coronavirus has all but sidelined the former vice president’s campaign, according to a Reuters/Ipsos opinion poll released on Tuesday

The poll conducted on Monday and Tuesday of more than 1,100 American adults found that 46% of registered voters said they would support Biden if he were running against Trump in the Nov. 3 election, while 40% said they would vote for Trump.