The true, dark motives of the people behind Greta Thunberg

A short summary of Greta’s motives: link.
(Swedish language – please use the translation function on top and bottom of each page.)

1. Attack politicians to make them vulnerable to media pressure

Pressure and destabilize governments by calling them out as climate offenders. This makes the governments susceptible to media pressure.

2. Move authority away from countries and to the European Union

Greta disrespects Swedish politicians by not talking to them. Greta campaigns in Sweden but only outside the parliament building. She does this to paint an image of the Swedish parliament as useless and authority should be moved to the EU (which Greta visits).

3. Greta creates conflict between people so news media can pitch groups against each other.

Split up the population in groups that can be manipulated into conflict by media. Climate activism is connected to young people, in particular girls. Older people can not partake in Greta’s “school strikes” and are attacked by “How dare you!”. The climate issue itself is dividing since the government has not yet adopted a program how to handle it.

Greta Thunberg is backed by socialists. Her basic message is to spread hate, conflict and disruption among people and to destabilize governments to make them susceptible to control by news media and other international networks.

Surprisingly Greta requires nothing from neither industry nor common people. EV travel is $2/10k, a Tesla is $100.000. Common people do not need to reduce flying or share commuting. Airline CEO says business is hard because of Greta, but the company shows large profit.

Greta only scolds politicians for not doing enough. And they applaud her for that! They want to do more. This means they will raise taxes and give up control to the European Union. Climate alarmists claim that only organizations larger than nations can “save the planet”. This is a way to pave the way for socialism, globalism and the New World Order.

Greta puts pressure on governments by telling them to solve the climate crisis. A crisis which does not exist but is a constructed problem. To reduce CO2, Greta wants society to be turned back to Stone Age. This can never be done so politicians only do lip service. Any politician not obeying news media in other fields will be called out as climate crook. Neither can a politician try to follow Greta’s agenda because she just talks about crisis, but never about concrete means to solve it. So any politician trying to follow her agenda will be accused by the press to solve the problem wrongly. And turning back society to stone age will make the politician unpopular. Therefore the climate crisis will always continue to be an unsolved problem, making the politician weak and under control by the press.

Like refugees, the climate frenzy is also directed towards Europe. In Europe taxes will be redirected to the EU.

Greta is not qualified. News media suddenly appointed a 15 year old girl to be the world’s most prominent climate authority, even though she had never been interested in the subject before. She has theater class training and can perform dramatic speeches. She is very poor off script. Basically she knows no more than any of us (including this blog author) did when we were 15. (When this is written Greta recently turned 17.) She is just an ordinary kid manipulated by globalists.

Within one year, a 16 year old girl, without other qualifications than being an activist, becomes leader of a global climate movement and is nominated for the Nobel Peace Prize. The role of her famous parents and their connections to an advertising agency have been pointed out elsewhere.

Connections to Gates and Soros exist, see the illustration above. [ -1-, -2- ] Luisa-Marie Neubauer, One Foundation, also co-initiated Fridays For Future (one part of “Greta’s” movement) and also picked up the “Children’s peace prize” for Thunberg.

Greta Thunberg has training as an actress but no scientific background. Her over acting during the speech in the UN shows that she is an actress giving a performance.

Experts and governments have not yet been able to come to a conclusion regarding the global warming theory. But why is Greta promoted to this high degree?

Governments have been able to address previous environmental issues, like f.ex the hole in the ozone layer and nuclear power. Why is the climate issue not approached in the same methodical way, using experts, governments and if needed referendums? Instead activism and discussions among people are supposed to resolve a complex scientific and political problem! Activism and discussions among people are important but must also be followed by government action. Why is Greta Thunberg’s activism promoted in extreme ways but governments do not act? Who benefits from Thunberg’s activism?

Today many countries are no longer independent. They are controlled by an international network. This network controls the decisions of governments through, among other mechanisms, news media and supranational organizations, like the European Union. This is clearly seen by f.ex. the difficulties for The United Kingdom to leave the EU (“Brexit”) or by forming a government in Sweden 2018 since the parties were under order not to talk to a nationalist party which received a significant share of the votes.

Greta Thunberg’s rise to fame is entirely based on being a tool for her backers’ globalist agenda. In a socialist manner she was picked by the elite for her connections and acting abilities. She and her environmental protection organization was never tested in competition with anyone else but simply promoted by news media.

Major Swedish daily Aftonbladet reported about her already the first day she “went on strike”.

A young girl with psychiatric diagnoses was chosen since anyone criticizing her message can falsely be labeled a “hater”. Some have even compared the “spin” behind Greta and the climate theory to that of the Nazis.

When Greta meets ethnic groups she suddenly stops demanding they should contribute to climate activism, like others should, in her opinion.. 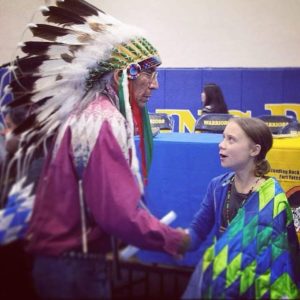 A 15-year-old with relational problems, psychiatric diagnoses also demanding special assistance skips school on Fridays to create an international environmental movement! Her only plan is to sit on the street with a sign. She has never done anything similar before and her performance at press conferences is poor. But now it is claimed she has written a string of professional speeches. She is showered with awards. Her statements are considered an absolute truth by all media.

This is naturally a “perfect storm” planned by media and PR-consultants for a long time. F.ex this girl does not have the background to write these professional speeeches having political undertones.

A young girl is a symbol of innocence. Greta is a vegan and very slim, which symbolize sacrifices she has made for nature and animals. The Christian deacon Anna Ardin has declared that Greta is a prophet. Ardin is also a CIA-agent according to her own Twitter and most likely also according to her own actions, both before and during the Assange case. 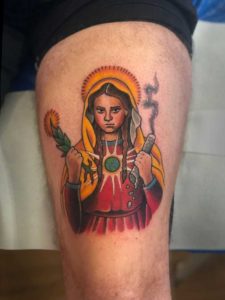 A tattoo strongly influenced by images of the virgin Mary, complete with a halo.

Greta’s ghostwriters let Greta express herself in terms of “I want you to do …” when she issues her dogmatic directives. This would not be expected according to Swedish equality culture. She would have been expected to say “we all should …” or “the only solution for nature is if we …”

One model the influencers behind Greta have used is probably the Pythia or the Oracle of Delphi. She was a young virgin speaking for the God Apollo.

Hiding a political message behind a young girl makes for strange argumentation. Greta dictates orders to world leaders, but if someone asks how to implement them, she or her followers say she can know since she is only a child!

In forums some posters make references to the Bergman movie The seventh seal. The title refers to the Book of Revelations. On Judgement Day a new world order will be created – a clear reference to the globalist New World Order being compared to the building of the christian kingdom of God, on earth.

As Christ broke a new seal (seal) and continued to roll up the book one more piece, John revealed further pieces of the breaking of the social and political development that would take place on our planet, as well as the closing sequence of events that Jesus declared would lead to ” the end of time, “that is, the end of this age, the return of Jesus to earth, and the establishment of a worldwide government – the kingdom of God on earth.

Greta’s extreme activism without sufficient scientific foundation will divide the population into “alarmists”, supporting her and “deniers” asking for more, scientific evaluation of the global warming theory. Splitting up a population is an efficient way to rule it. The population becomes weak when it is consumed by internal conflicts. Alarmists will support the climate agenda and in turn receive support from news media.

Greta’s hyperemotional speech in the UN without strict scientific base makes her an object for criticism. Any criticism against her is labeled child abuse and the persons criticizing her are called “haters”. If she can not answer a question it is “because she is only a child”. – But she can still tell world leaders to do!

Greta was instructed to give a hyperemotional speech in the UN. This will not convince listeners in neither a scientific nor an emotional way. The lack of scientific foundation only serves to create hatred towards her, further increasing the gap between “alarmists” and “deniers”.

She has no scientific background. After telling the world leaders what they should do she receives simple questions at press conferences but she can not even give simple answers. Choosing such a poor representative for climate change naturally has a purpose. The purpose is to promote hatred and division in society.

If the people behind Greta had wanted to convince they would have chosen an older messenger with scientific background that could give good replies to reporters. But to convince the listener is secondary to promoting hatred.

Before Greta travels around the US she is said to use an Electric Vehicle. But during the entire, highly publicized trip, only one, strangely cropped, pay-wall image of Greta in an EV appears. No first hand information indicates she travels EV. A video shows her travelling a 276 hp, 3.3L V6 KIA Sedona and she is said to go by train which usually are diesel in the US.

She receives maximum support but it has been decided that she should not follow her own agenda of environment friendly travel. This discrepancy is created to further increase criticism towards her and create division among people.

Foreign interests, supported by banks and multinationals, already control politicians (they are f.ex not allowed to talk to the only nationalist party in Sweden, with 18% voters), media (oligarchs form an international network publishing synchronized news) and science (only positive climate change results are given attention).

No one needs to be convinced. Now the elite only focuses on keeping the people split up and in conflict. Several areas are involved: feminism, mass immigration, climate, HBTQ …

The conflicts Greta’s masters instruct her to create are connected to gender.

Climate activism is orchestrated to promote conflict between young people, in particular girls and older people.